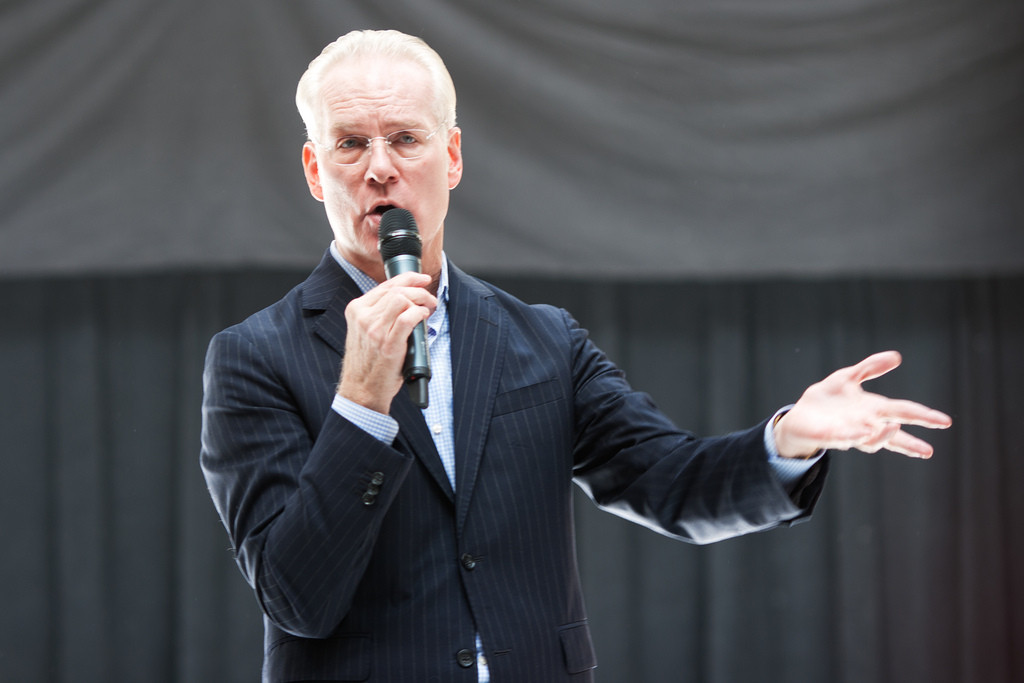 Tim Gunn met with me on an early morning this summer in New Orleans at the National Art Education Association (NAEA) Art of Design convention where he is the keynote speaker, to talk about transparency in fashion. It would surprise no one that Gunn is as put together in person as he is on TV, with pocket square flair that matches the hue of his tie set against the background of a handsome bespoke striped suit.

His mannerisms are warm and composed as we sit together in a chilly room in the Ernest N. Morial Convention Center. As we get started, what immediately strikes me about Gunn is his thoughtfulness in answering each question. He isn’t one for canned responses and he carefully peels back the layers of each query before commenting.

The Art of Communication

This is, of course, a skill that Gunn has developed after 29 years as a teacher and 10 years and 13 seasons as a mentor on Project Runway. To hone the art of communication, he says he had to learn that feedback, particularly constructive criticism, must be thoughtful and infused with empathy or it likely falls on deaf ears. In order to critique effectively, Gunn rehearses in his head the language and tone he plans to use. “I then ask myself how I would respond to the words and intonation if someone said them to me,” Gunn says. “If it’s remotely questionable or sounds inappropriately harsh or provocative, I make alterations.”

The ideal, Gunn says, is that the designer looks objectively at his/her own work before Gunn gives his analysis. This is challenging, he says, particularly in a Project Runway-like atmosphere where the designer is asked to be objective about a work that he/she just created. “It’s my job, in that short window of time, to get the designer to step back.”

Gunn Tells the Fashion Industry to Step Back and Give Transparency

In many ways this is an excellent analogy for the fashion industry as a whole. At the moment it seems that the industry isn’t stepping back to look at its work objectively when it comes to transparency, despite insistence to do so from consumers and industry experts. In fact, concerns about lack of transparency in the industry have gone mainstream — there has been a Norwegian reality show about the horrors of sweatshop labor in Cambodia where three teens experienced a fraction of a Cambodian textile worker’s life, and comedian John Oliver did a piece on the hazards of fast fashion for laborers. Reports on factories where underage children work, where there are exorbitant recruitment fees and indentured servitude or where a fire extinguisher map is merely, according to Oliver, “an aspirational poster for fire safety” (since there are no actual extinguishers), show that the common denominator is always transparency. 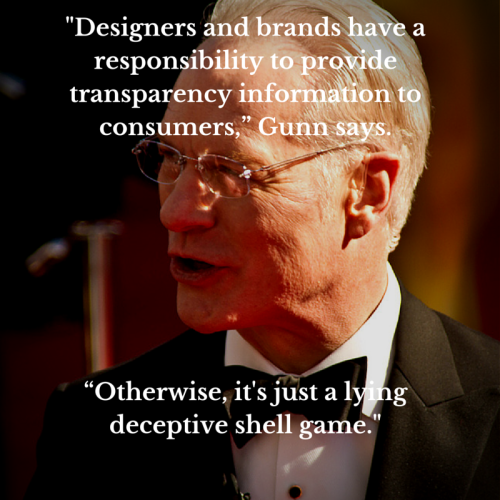 As a mentor and teacher, Gunn tells his students and mentees that they have a responsibility to know where materials come from and to scrutinize where they are sourced. At times, Gunn has been shocked by what has appeared before him. In 2003 a student completing his thesis in final fabric planned to use a material that the student believed to be suede. It was not. “I told the student to go back to where he purchased it and find out what it is and where it’s from,” Gunn says. It turned out that the suede was actually seal, horrifying both Gunn and his student. “I told him he couldn’t use it and he had to take it back.” This is a signature, Gunn says, of what can go awry when transparency is not adequately examined.

There is increased awareness in the fashion industry when it comes to the need for transparency, Gunn says, but he isn’t confident that this has translated into action. Some independent designers, retailers and brands offer transparency on garments from seed to shelf but they remain a niche in the industry. Gunn, who has witnessed numerous flash-in-the-pan trends as well as longstanding changes in fashion, hopes that transparency in production and the supply chain will become standard practice. “Designers and brands have a responsibility to provide transparency information to consumers,” Gunn says. “Otherwise, it’s just a lying deceptive shell game.”

You can see this story on Huffington Post Impact.

How to Build an Ethical and Sustainable Wardrobe
Lip Service: How To Make Natural Lip Balm
Pillow Talk: An Easy Way To Freshen Up A Space
Jumping for #Sustainable Work Pants!